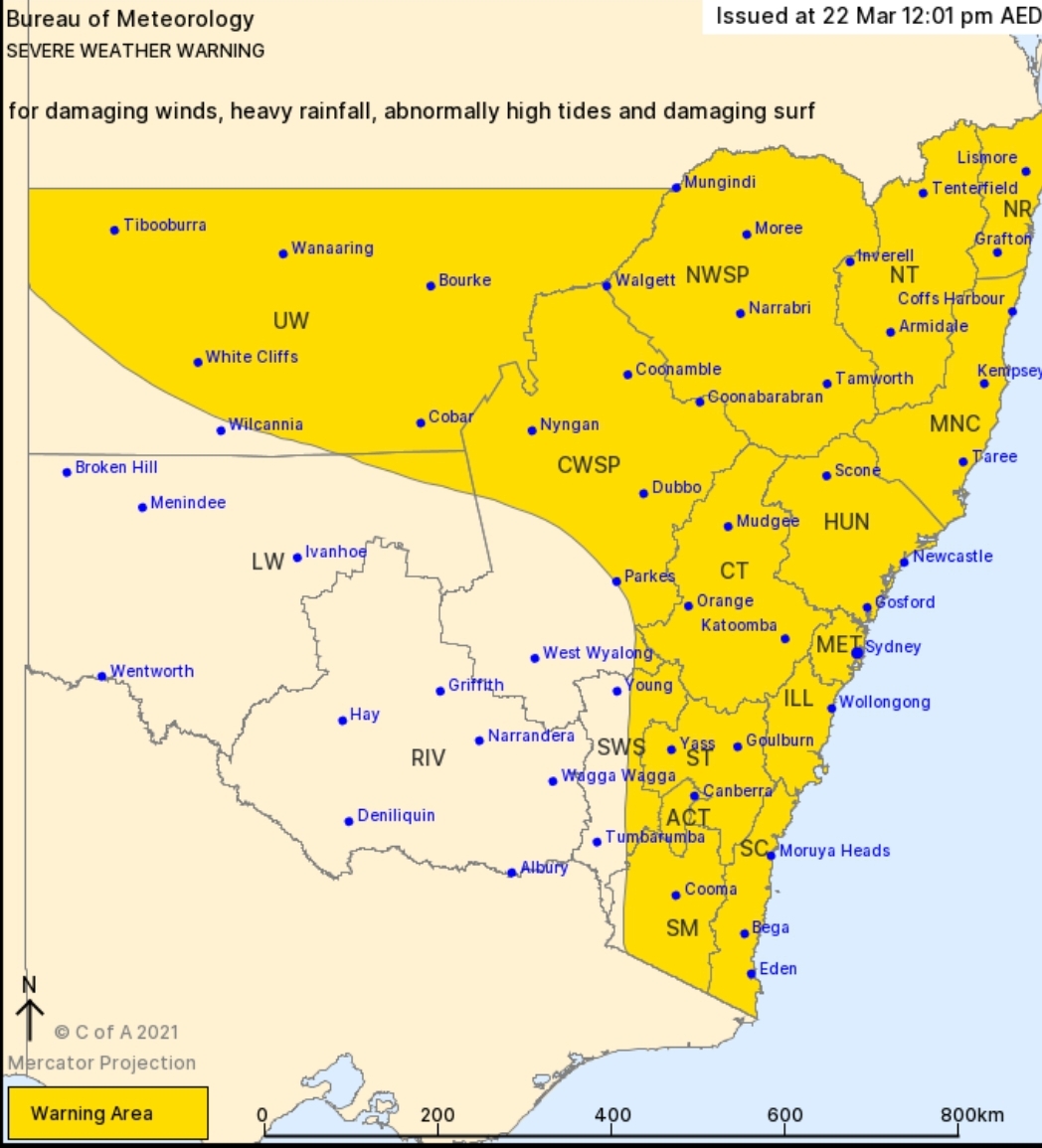 HEAVY RAIN CONTINUING IN THE NORTHEAST AND DEVELOPING ACROSS THE NORTHERN INLAND TODAY.

A strong high pressure system over the southern Tasman Sea continues to drive widespread and persistent rain onto the New South Wales coast. This is expected to continue today, particularly about the Mid North Coast and Northern Rivers.
Meanwhile, a low pressure trough in the state’s west is deepening, bringing rain areas to the northern inland today. In this area, heavy rain is possible from the morning, becoming more likely in the afternoon and evening, extending to areas of the southeast over Tuesday. On Tuesday, as the trough reaches the Tasman Sea, a low pressure system may form, bringing increased rainfall, strong winds, damaging surf and abnormally high tides to the east and south.
Most areas of New South Wales will see a clearing trend early Wednesday as a drier airmass moves into the region.

HEAVY RAIN, likely leading to FLASH FLOODING, presents a SERIOUS RISK to the Northern Rivers and Mid North Coast today and on Tuesday. Some risk remains for the Hunter and Central Tablelands districts during this period, particularly given the saturated nature of catchments. Due to extensive flooding across the east, localised moderate rainfall may also bring the risk of FLASH FLOODING. In some areas, heavy rain and flooding may be LIFE-THREATENING.

DAMAGING WINDS, averaging 60 to 70 km/h with peak gusts in excess of 90 km/h are possible along the coastal fringe south of Seal Rocks from Tuesday morning.

VERY HEAVY SURF, which may lead to localised damage and coastal erosion is likely for areas of the coastline south of Moruya from Tuesday afternoon, as strong northeasterly winds build over the waters. Beach conditions in these areas could be dangerous and people should stay well away from the surf and surf exposed areas.

ABNORMALLY HIGH TIDES which may cause sea water flooding of low lying areas south of Moruya are also possible. Water levels could exceed the highest tide of the year during Tuesday morning’s high tide as a storm surge moves into coastal areas.

River catchments in this area are wet, bringing an enhanced risk of renewed RIVERINE FLOODING. Numerous flood watches and warnings are current. Latest updates at http://www.bom.gov.au/nsw/warnings/.

HEAVY RAIN, likely leading to FLASH FLOODING, is forecast to develop in parts of the Upper Western, Central Tablelands, North West Slopes and Plains, and Central West Slopes and Plains forecast districts from this morning, becoming more likely in the afternoon and evening. Heavy rainfall will then extend to areas of the ACT, South Coast, Snowy Mountains and Northern Tablelands during Tuesday. There is an enhanced risk with any thunderstorm activity.

Widespread rainfall may lead to RIVERINE FLOODING, and a Flood Watch is current for catchments on the western slopes.

Rainfall observations to 9am Monday include:

The State Emergency Service advises that people should:
* Move vehicles under cover or away from trees.
* Secure or put away loose items around your house, yard and balcony.
* Keep at least 8 metres away from fallen power lines or objects that may be energised, such as fences.
* Trees that have been damaged by fire are likely to be more unstable and more likely to fall.
* Report fallen power lines to either Ausgrid (131 388), Endeavour Energy (131 003), Essential Energy (132 080) or Evoenergy (131 093) as shown on your power bill.
* Don’t drive, ride or walk through flood water.
* Keep clear of creeks and storm drains.
* If you are trapped by flash flooding, seek refuge in the highest available place and ring 000 if you need rescue.
* Be aware that run-off from rainfall in fire affected areas may behave differently and be more rapid. It may also contain debris such as ash, soil, trees and rocks.
* After bushfires, heavy rain and the loss of foliage can make the ground soft and heavy, leading to a greater chance of landslides.
* Stay vigilant and monitor conditions. Note that the landscape may have changed following bushfires.
* For emergency help in floods and storms, ring your local SES Unit on 132 500.

The next Severe Weather Warning will be issued by 5:00 pm AEDT Monday.

Warnings are also available through TV and Radio broadcasts, the Bureau’s website at www.bom.gov.au or call 1300 659 210. The Bureau and State Emergency Service would appreciate warnings being broadcast regularly.